SIX months, you guys!!  SIX.  I go between feeling like it was just yesterday that I was sitting anxiously awaiting the fancy test results from the OB to tell me I was going to be a mama and feeling like she has pretty much been here my whole life.  I honestly cannot picture life without her in it, but time is moving way too fast!  She’s basically a toddler now.  I walked in the other day when she was supposed to be napping and she was sitting up playing.  What?  THEN, I walked in this weekend while she was napping and she was STANDING.  She bathes in a bucket now because her old tub is now a small joke.  Literally.  My guess is she weighs about 20 pounds and she wears around 9-12 month clothes, which is ridiculous.  I am hesitant to pack anything away in the 6-9 month range because I have a feeling that once she starts crawling which is any day now, she may thin out a bit.  She has tried carrots, corn, sweet potatoes, pumpkin, and green peas.  We stopped the rice cereal and switched to oatmeal because I think it was irritating her a bit.  She has slept better through the night since.  She sleeps from about 7-4 am and then eats and goes back to bed till about 6 or 7.  She takes a 2 hour nap in the morning and then a 2 hour nap in the afternoon.  We were trying to be more thoughtful about her awake time and putting her down no more than two hours after she awakes, but it turns out it was probably more the rice cereal than over tiredness.  We have to fight her less with just the two naps, so for now that’s what we are doing.  She literally changes every single day which keeps us on our toes!

In case you would like to look at how far we have come:  here are the previous months!
One Month
Two Months
Three Months
Four Months
Five Months

SO now for the fun part!  Freshly Picked has offered to give one of you lucky ducks a pair of their highly acclaimed soft sole moccasins!  YOU GUYS.  These are the BEST shoes out there.  I have bought so many shoes and socks in the last year in the hopes that she would don them with style and grace.  But then I actually had the baby and tried to put them on her.  Off in seconds.  Seconds.  Plus they mostly just fall off when she wiggles in her car seat.  These moccasins stay on no matter what comes at them.  They can be a little tricky to put on until you get the hang of it, but what that means is that they are next to impossible for baby to pull off.  There is an elastic band that keeps them secure on their feet which is just amazing (hidden inside the soft leather so it does not irritate baby).  They are also real leather which, here comes the best part, once they start walking and crawling, their footprint becomes a part of the sole.  Swoon.  So, I got them in a size 2 for now and then I purchased the size 3 for when she starts walking.  I can’t wait to show her her little footprint someday on these sweet shoes.

Requirements for entry:  Winner cannot have won another Freshly Picked giveaway in the last 60 days, must be following Freshly Picked on Instagram (if you do not have Instagram, you may follow them on Facebook, just enter in the rafflecopter that you are following and put your Facebook name and then let me know in the comments), and  must be 18 years or older!  You may enter internationally, but you will have to pay to ship them outside of the U.S.

*I was sent a pair of moccasins for review, but as always, opinions are my own

At least for me and baby girl, summer has arrived!  I have been excited for this day since the day I went back to work and have been prepping baby girl’s summer outfits since she came into this world.  Look out summer, here we come!

Flower Sunglasses $5!!
Seersucker Swimsuit Not listed online, but may be available in store.  (she also has this one)
Logan and Lenora Wet/Dry Bag 15% off with code PLANNINGPARIS15
Babyganics Sunscreen
Baby Flip Flops

Hope you all enjoy your week and all this sunshine!
Erin

Good morning all! HAPPY FRIDAY!!! Eeek! It’s been a great week, but this mama could use a little r&r. For sure. Here are my little nuggets of joy that have left me smiling all week!

1. Not only is this candle visually appealing, it is lavender scented. Bring on the relaxation!

3. I am a little worried about my next appointment on Monday. They may tell me to slow my roll a little. Sweets are my new thing. Dying to give this chocolate mousse a try.

4. This clipboard is perfect and a pretty reasonable price! Might have to meander over to Papersource very soon!

5. These pens I’m telling you, have magical powers. They have the ability to brighten any day.

6. Chloe Scallop Flats. Ok, so the only way to afford these beauties is to buy them used. And, of course, they are sold out. I am on the hunt for something similar. May just do a shoe post next week.

7. This sweatshirt cracks me up. Onesies, sweaters, and shirts with sayings seem to be the only gender neutral clothing I am finding these days. And I don’t hate it.

8. I am pretty much obsessed with June and January right now. Not real friendly in the gender neutral department, BUT they just launched their new blankets and I am dying. They look so soft and they are darling to boot!

9. I swear I can make these gender neutral. I bought a similar pair about two years ago, WAY before we were ever expecting because I cannot resist a striped shoe. I absolutely cannot wait to dress this baby!

Well, that’s it for me! Hope you all had a great week and found some things that made you smile! Have a wonderful weekend!
Erin

Good morning! So… I’m on snow/cold day 3 of the week. A one day work week? I’ll take it! I have gotten so much done this week–including negotiating a summer internship! Which officially puts this girl done with her master’s by December!! I love learning, but I’m ready for a break from tuition checks! Having an official plan in place is making me smile from ear to ear this week! Here’s what else has made me smile this week!

So what about you all? What made you smile this week?

Have a snazzy weekend, friends!
Erin

Good morning! What a weekend! The thing I love the most about our move to Columbus is how much closer we are to friends and family. A 3 day weekend getaway is now totally possible. We just love it!

I am dragging just a little and in need of a little visual pick me up. Here’s what’s perking me right up this morning!

Hope you all had a great weekend and a great start to the week!
Erin 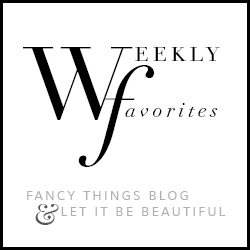